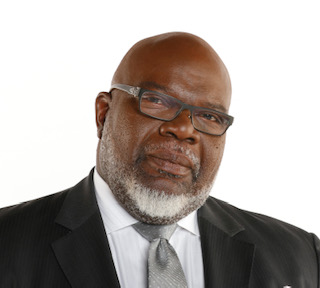 Bishop T. D. Jakes is a charismatic leader, visionary, provocative thinker, and entrepreneur who serves as senior pastor of The Potter’s House, a global humanitarian organization and 30,000-member church located in Dallas.

Named “America’s Best Preacher” by Time Magazine and CNN, Jakes’ voice reverberates from the world’s most prominent stages from the White House to the Aspen Institute to Nasrec Expo Centre in Johannesburg, South Africa.

Beyond the pulpit, Jakes’ his worldwide impact is also felt through high profile conference series such as MegaFest which recently drew more than 91,000 participants in 2015.  This year’s festival is expected to break all prior records.

A new model for the 21st Century Renaissance man, Jakes is a committed philanthropist who gives back on an ongoing basis to the communities that he serves worldwide.   As a business leader, his media and entertainment

empire spans film, television, radio, music and best-selling books, including the box office hits “Miracles from Heaven,” the follow up to “Heaven is for Real” and The New York Times Bestseller “Destiny” as well as the forthcoming “Second Wind.”  He also heads an award-winning music label and helmed a self-titled talk show during the 2016 fall season.

Celebrating 40-plus years in ministry, Bishop Jakes has been married to Serita for more than three decades, and is the father of five and also a proud grandfather of eight.